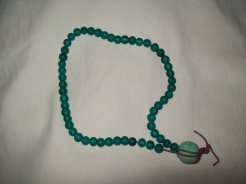 Back in the late 60’s and early 70’s, my aunt and uncle used to sometimes come from Reading to visit us in London on a Sunday.  She was an Oxford-educated academic who worked with her husband, an Austrian writer, on translations of European literature – Musil, Schoenberg, Kafka and others.

The pair of them, old, slow and somewhat remote-seeming struck a little fear into me, though only a little; they had no children of their own and were quietly kind in a quietly grand sort of way.

To my knowledge, my aunt wrote and published just one book in her own right, The Rose-garden Game (1969) and I have been fascinated recently by some of the content.  Its subject is, of all things, prayer-beads.  Though she focuses primarily on European rosaries of the Catholic tradition, she has quite a lot to say about Buddhist and Hindu prayer-beads, malas.  In the light of my own practice, it is a lovely feeling to know that there is a family background in this context.

I use a mala that I made myself.  According to my aunt this half-mala is, at 54 beads long, suitable for a lay-person like me.  It is made of blue-green glass beads half an inch or so in diameter strung on a leather thread and topped, so to speak, with a large pale-blue ceramic bead – the meru.  All from a craft shop.  When I talked with the Rinpoche in Canterbury at the end of January, he asked to see them.  I handed them to him and he held them, breathed on them and said some words over them, I guess, blessing them.  It is nice to think of that when I’m passing them through my fingers as I chant.

A string of beads is an attractive thing to most people.  The little, colourful shiny balls, all strung together in a row, are pretty.  If the mala is a suitable length it can, obviously, be worn as jewellery.  Some might say that would be a bit disrespectful – it is, after all, a piece of equipment designed for a serious spiritual function, aiding the chanting of mantras, prayers and contemplation in general.  The repetitive action of moving the beads along the thread from left to right, one by one, is calming in its simplicity and engenders a sense of one among many – union – the meaning of the word yoga.

I personally don’t wear my mala as jewellery.  It is too short to wear as a necklace and while it does fit twice round my wrist I’m not accustomed to bracelets.  But I don’t really think there’s a problem with doing so.  The reason I chant is because it helps me experience and give more love and happiness in my daily life, and I don’t see any contradiction between that and the simple pleasure of enjoying life’s pretty things.

Maybe it was something in the combination of spiritual contemplation and beauty inherent in prayer-beads that fascinated my aunt all those years ago.  She died when I was small so I can only infer from my distant memories of her and from her book.  It is a lovely surprise for me, however, to find out after two years of daily practice with beads, breath and voice, that my interest in these things has a genetic precedent.

This site uses Akismet to reduce spam. Learn how your comment data is processed.